Spencer asked to have his girlfriend Natalya over for dinner for her birthday.  And asked if I’d help him cook her dinner.  Like father, like son!  She likes shrimp so we decided on the house favorite, tomato cream sauce with pancetta and shrimp.  Bread and salad would round out dinner.  For dessert, we’d pick up a red velvet cake for two from the store.

I made an Italian herb sourdough ahead of time… 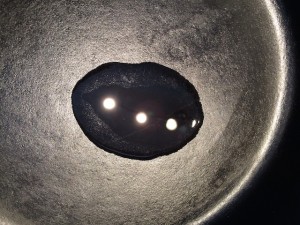 Oil in the bottom of the dutch oven 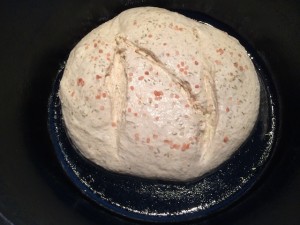 After the rise, sprinkled with Himalayan rock salt and rosemary, scored with an “N” 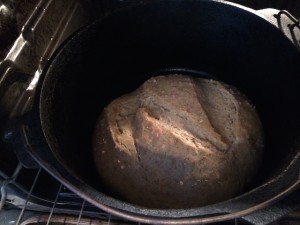 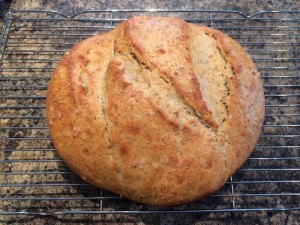 After another 10 minutes at 325°F with the lid off

I prepped for the pasta to make it a little easier on my chef-in-training under pressure with an audience.  He made the salad on his own, also ahead of time. 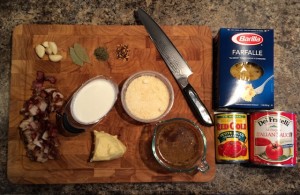 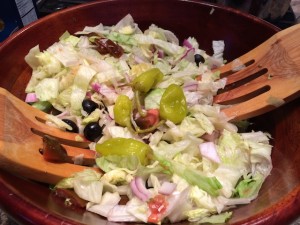 With Natalya seated at the bar in front of the stove, Spencer assumed the helm.  He started with house made pancetta dice in the skillet to render off some of the fat and to brown the pancetta. 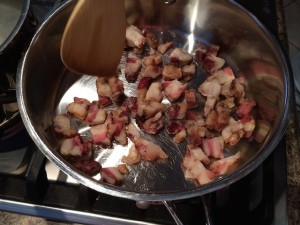 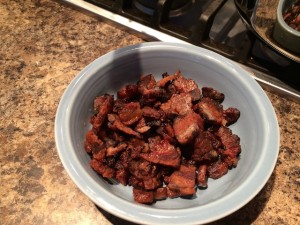 Next up, he sautéed the garlic cloves in the rendered pancetta fat.  From there, he added the tomatoes, beef broth and herbs & spices. 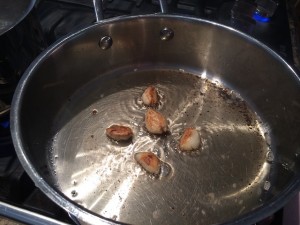 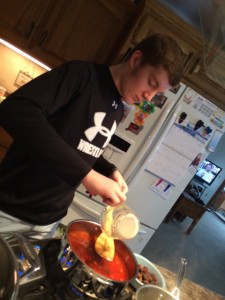 He let the sauce reduce and boiled water for the pasta and the shrimp.  While we waited on the water, we whipped the heavy cream to give the sauce that airy silky texture.  We went for the 16-20 count raw deveined tail on shrimp for the special occasion.  Here he is dropping the shrimp in the water. 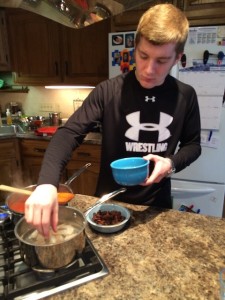 After the shrimp just cooked through, we drained them and ran cold water over them to chill them and drained again.  He put a ladle of the tomato sauce over the shrimp to hold them over until time to serve. 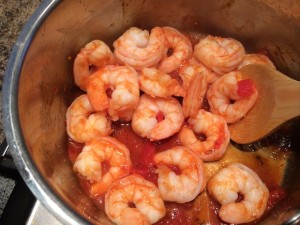 About 3 minutes before the pasta was done, he stirred in the butter, then the whipped heavy cream, and finally the grated parmesan.  Pasta was drained and combined with finished sauce.  For the plating, a piece of butter bread, pasta topped with pancetta, shrimp and fresh grated parmesan and dash of crushed red pepper. 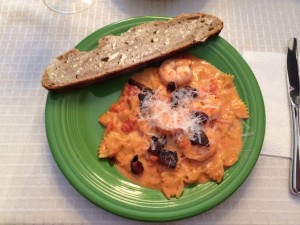 Dinner plated and ready to enjoy! 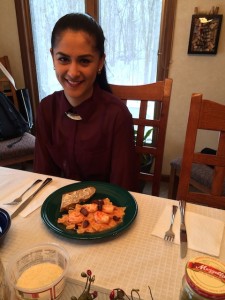 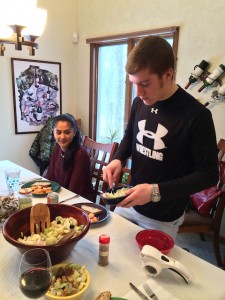 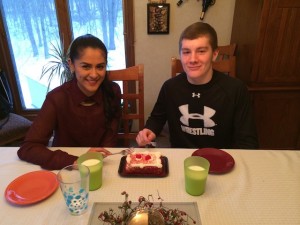 Proud moment for dad watching his son grow into a fondness for cooking, chivalry and romance.  I’m clearly not the perfect father or role model, but at least some of the good parts are rubbing off on the kid!  Perhaps there is hope for him yet! 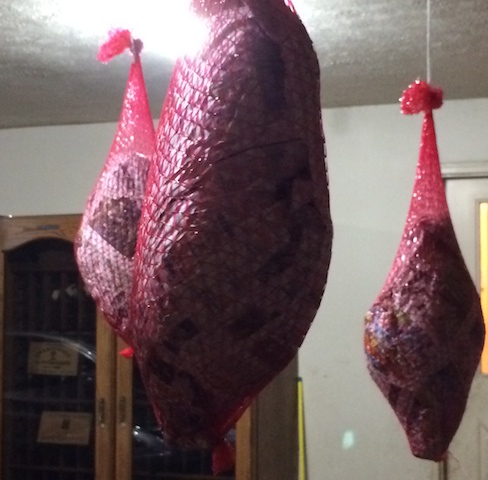 I discovered sugar cured ham last year in an experiment with one of my 4 hams.  It made an impression… I made 4 sugar cured hams this year!  I hope you enjoy the journey…

December 14, 2013: butchered the pigs with Craig and Marc 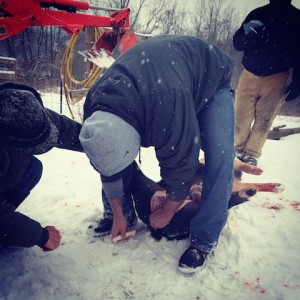 The pigs hung in the cooler overnight, were butchered the next day, and the hams were rubbed and hung the next day. 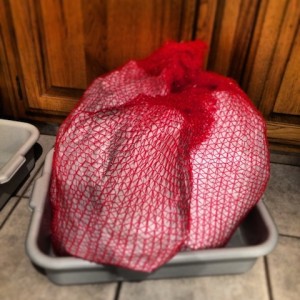 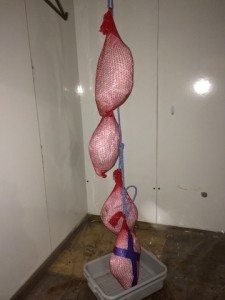 The hams were rubbed with salt, sugar, black and red pepper and Instacure #2.  I got the recipe from my mother-in-law, and a nearly identical version along with some instructions can be found on the Missouri Extension website. 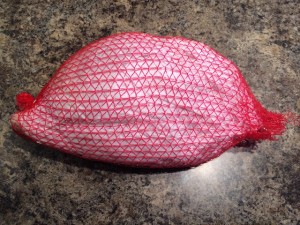 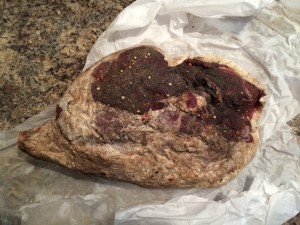 I put them on the smoker for about 2 hours over hickory.  Just enough to get some good aroma and color. 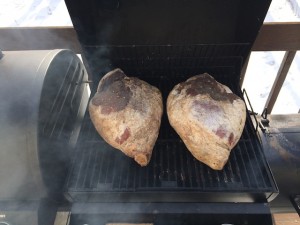 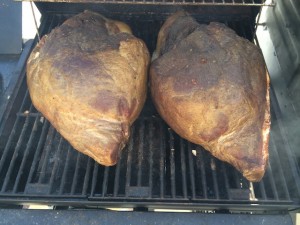 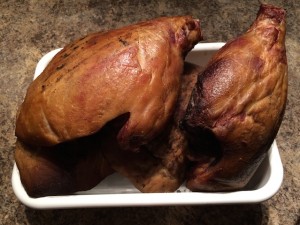 Last year, I cut them after curing.  I smoked the hock and the rump roast.  I sliced the center section into 1-pound packages for pan frying.  This year, as you can see, I smoked all four hams whole.  I am also taking another leap into the unknown.  After having dry aged the prime rib and cured and aged the various salumi and schinken, I figured I could age my hams.  I’ve read about Virginia hams that get smoked in an outdoor smoke house and aged outside (but still inside the smoke house) year round for 3 years!  I’ll age one for 5 weeks until March 29 when the in-laws will get a nice surprise.  I’ll age another for 8 weeks until April 20 when I’ll roast part of one for Easter (the hock and center slices will get put in the freezer that weekend).  The other two will age for 6 months until August 24.  Not exactly a 3-year old funky Virginia country ham, but I feel pretty adventurous with my plans.

Hams hanging in the garage in front of the wine cabinet 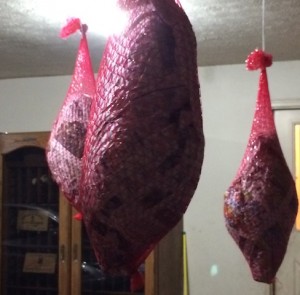