I routinely joke about Formichella’s being the Italian restaurant I’ll open someday. This weekend I added Gareiss Landaus, my someday maybe German restaurant, to the joking at dinner time.

During my several trips to Germany, a few foods have become favorites. The cucumber salad is something I can’t seem to pass up regardless of what else is on the menu. For the entrees, anything with the mushroom sauce was inevitably my selection whether it was beef, pork, venison or wild boar. The sauce was always delicious on both the meat and the spätzle, a cross between a noodle (size & shape) and dumpling (dough and preparation). A favorite after dinner is a shot of schnaps, typically obstbrand (made with fruit rather than grain).

So on to dinner… Believe it or not, there were still tomatoes to be found at the farmers market, so I added a beefsteak slice to the gurkensalat (cucumber salad with onion and dill). 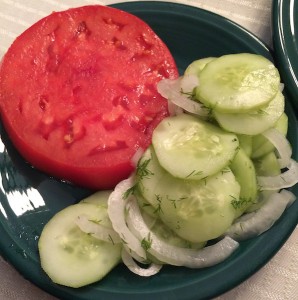 It was a beautiful day, so the main course all went on the grill. On the main rack, I made schweinekotelette (pork chops) with dunkel champignonsosse mit pfifferlinge (mushroom brown sauce with chanterelles). There is just something peaceful and relaxing about stirring a sauce and getting lost in your thoughts with a drink in your hand… but I digress. For the vegetable, I borrowed from one of the tapas at Cerulean and put a German twist on it – spargle mit schwarzwalder schinken und Manchego käse (asparagus wrapped in Black Forest ham and Manchego cheese). Instead of spätzle, I made bratkartoffeln (potatoes and onions in butter) grilled in a foil pack on the top rack of the grill. 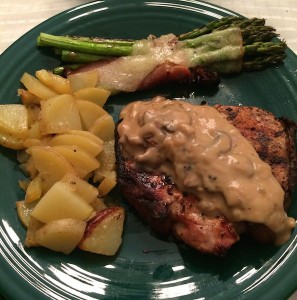 I finished the meal with a shot of obstbrand from apple, pear and cherry that was a gift from my good friends, Andi & Denise. 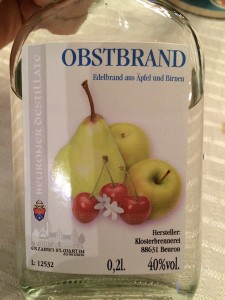 I think I’ll be enjoying a few more German meals in the near future – prost!

I’ve enjoyed some great German food during my several trips there over the past few years. I decided to learn to cook some of my favorites at home. To start the process, I checked out Amazon.com for some German cookbooks and found several good used books.

Three of them came this week:

Really nice photos but not many recipes and nothing on to-do list.

I’m expecting these two next week:

Next up… my first dinner trying out a few new things…