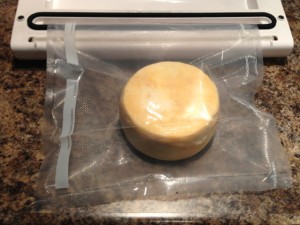 My first Muenster cheese is done ripening and is headed to the refrigerator for aging.  It’s not near as orange as the store bought stuff… but I’ve since read that the orange is mostly annatto, a cheese coloring additive.  This one certainly smells like it’ll taste good.

Cheese Trivia: Brevibacterium Linens is the bacteria used to surface ripen cheeses such as Muenster and Limburger, AND it is the same bacteria that make your feet stink.  The bacteria eat the dead skin cells and produce compounds made up of sulfur and ammonia which causes the odor.

Who wants to try some of my cheese now?!?