The left pair is made with Philly Whipped Cream Cheese, the middle pair with the yogurt cream cheese and the right pair with milk cream cheese.

The yougurt cream cheese, not surprisingly, has a noticeable yogurt flavor that makes me think of yogurt as I eat it. Because of that, I didn’t find myself wanting to add any salt to it to make it taste more like the store bought cream cheese I’m used to. It tasted “right” as a yogurt flavored cream cheese.

The milk cream cheese had the brightest, most sour flavor of the three that made it taste like a “new” flavor to me – not like store bought cream cheese and not like yogurt. I decided to salt this version to make it more of a cheese to my taste buds.

Both of the homemade versions felt like food on my tongue as opposed to the strange sensation left by the xanthan gum, carab bean gum and/or guar gum that is in the Philly stuff – mmm mmmm gotta get me some guar gum!

What now? Well, the salami sliders will get milk cream cheese on the Formichella’s menu. Yogurt cream cheese is faster and would do nicely for any recipe where the yogurt flavor could blend in with other ingredients. I’m sure Philly cream cheese will still show up in my fridge for non-foodie use but not for anything I’m cooking for dinner guests.

No, it has nothing to do with pop culture or counter-culture. It’s raw milk and cream culturing on my countertop.

On to the foodstuffs…

I am making the yogurt cheese by pouring a quart of Stonyfield Organic Plain Whole Milk Yogurt into a cheesecloth lined colander over a glass bowl to drain the whey off the curds.

I am making the cream cheese by combining 4 ounces of Marburger Farm Dairy gourmet Buttermilk and 28 ounces of milk (from 12/30/12). The jar is covered with a cloth held on by the lid ring.

I am making the sour cream by combining 1tbs of the same buttermilk and 1 pint of cream (from 12/29/12) and covering with a regular lid and ring.

I set all of this up on my counter on top of my seed starter mat to get the temperature up to somewhere around 73 degrees to keep the cultures happy. I expect the yogurt to be done draining early in the morning. The sour cream should be ready for dinner tomorrow. The cream cheese should be ready to drain Saturday night or Sunday morning.

Stay tuned for the taste tests!

UPDATE: yogurt cream cheese went into the fridge after 6 hours. One quart of yogurt turned into almost a pint of whey and a pint of cream cheese plus some evaporation. It was tasty – I can’t wait for the milk version!

UPDATE: sour cream (aka crème fraîche) wasn’t thickened after 24 hours on the counter, so I stirred in a tablespoon of yogurt in case the buttermilk doing it’s job.  After another 24 hours or so, all was well, and I gave it a good stir and put it in the fridge.  The milk for the cream cheese hadn’t seperated yet either, so I did the same thing with the spoonful of yogurt. That brings me to Sunday morning… cultured milk is now in the cheese cloth lined colander draining to become cream cheese later tonight.

Happy New Year to all!

I’m fixing the traditional kielbasa and sauerkraut dinner tonight. I wondered about the tradition… I always thought of it as an “eat cabbage for good luck” tradition where sauerkraut was a convenient way to eat cabbage in the winter and kielbasa went well with it. Turns out the green leaves of cabbage are supposed to symbolize money. That symbolism felt a little underwhelming. Time to search for a better story… and I found one. 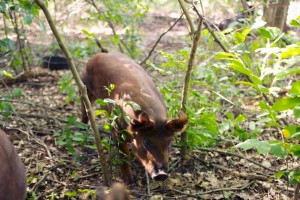 I’m going to eat my traditional kielbasa and sauerkraut with new meaning. The kielbasa is the new centerpiece to symbolize moving forward into the new year. The sauerkraut now just goes well with kielbasa. The kielbasa I made from the bigger gilt and the sauerkraut I crock fermented with farmers market cabbage.

What New Year food traditions do you have?

Extra eggs from the holiday? or the blizzard (ahem)? Scrambled eggs for breakfast… 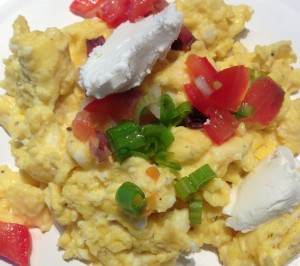 I am now the proud owner of a herd share.  What does that mean? I own a share of a dairy herd and am able to enjoy my share of the milk produced by the herd.  What is so special about this milk?  It’s raw whole milk (unpasteurized and un-homoginized and full of life) from happy, healthy cows that live outside and eat grass in an honest to goodness pasture.  That shouldn’t be anything noteworthy, but the white stuff in plastic jugs at the grocery store is none of those things.  More on real milk later… END_OF_DOCUMENT_TOKEN_TO_BE_REPLACED