I posted a whole 7 times in 2015. I guess that makes me not a very prolific blogger. All my posts were about food, so at least I stuck to a theme. Being a prolific blogger isn’t a goal, but sharing my own entertainment with others is fun. So… I’ll keep at it for 2016.

I actually started the year with a braised sirloin pappardelle. Foreshadowing for 2016 that I didn’t even realize until just now. More on that in a moment. I made that homemade pasta with my mother’s Atlas hand crank pasta machine. I’ve made a few different fresh pastas with that machine and with the KitchenAid extruder attachment. Fresh pasta is good. It’s fun. It’s worth it. Going into 2016, I now have the KitchenAid roller attachments, a tapered rolling pin, and Kansui (magical liquid needed for ramen and pretzels).

My new food thing for 2015 was duck. I made confit and bacon a few times and have used the duck fat in a few dishes. I’m looking forward to a few more trips to Maple Leaf to branch into some new duck dishes.

I traveled a bit and took a few photos but nothing very consistent or thought out. I plan to step that up a bit for 2016.

This past year has been an adventure in parenting. We’ve had highs and lows and college tuition and braces and glasses and a couple bets. 2016 will bring a graduation and another transition to and tuition for college. And hopefully more highs than lows. And I’ll be 2/3 of the way to being an empty nester this time next year.

I came across a book at mom and dad’s about braising (remember that foreshadowing comment earlier?). I’m intrigued… so this year will be Braise-a-month year. I’ve braised beef a few times in 2015 more by accident than on purpose. I’ll work on my technique, expand my proteins, and broaden the flavors.

I may take the plunge into full frame photography. We’ll see… that’ll require a new camera. Either way, I’m going to get back into the habit of carrying my camera with me on every trip to capture the new sights and work on my composition and technique.

Stay tuned… perhaps I’ll actually blog at least once a month and get food, travel and photography all into the act.

I was lucky enough to be able to sneak in one more trip to Europe before the end of the year courtesy of a customer R&D meeting. Rough life I lead, I know…

This was my first trip to Lake Geneva although we didn’t make it to Geneva proper. We were in the Lausanne area for this visit. Thanks to a beautiful 50-degree day, I enjoyed a nice run along the lake shore and stopped for a few photos. 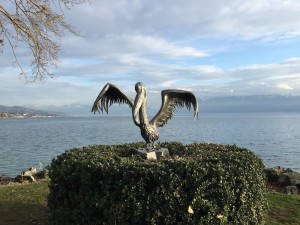 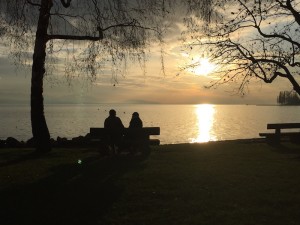 Pete and I enjoyed a great Italian dinner at Ghiotto’s in the cathedral square, cobblestones and all. We thought we’d go for dinner early and couldn’t find a restaurant open before 7pm. No early bird specials there! 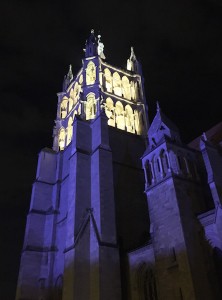 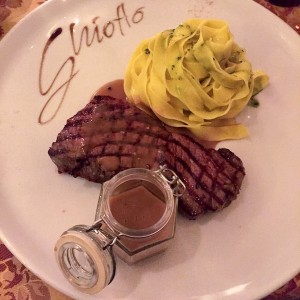 After a successful customer visit, I stayed at the Gasthaus near Pete’s town, Hirschen Horn. The restaurant served us an amazing dinner and I enjoyed the European spa. The Swedish sauna thermometer showed 87 degrees C or 188 degrees F!?! That’s hotter than my previous record of 143 F in Kuwait in August of ’96. 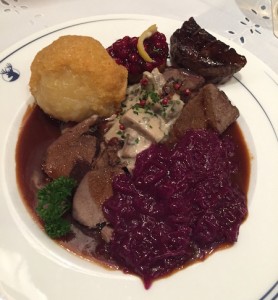 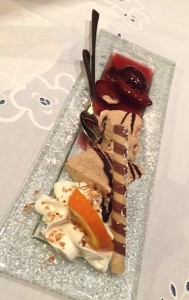 No trip to Tuttlingen is complete without some good Swabian food at Hauser or without some local sightseeing in town. 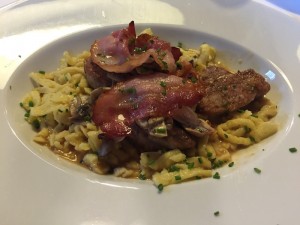 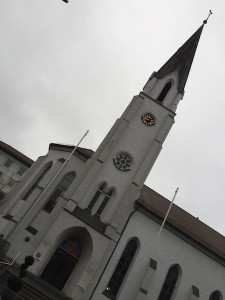 The church is right across the street from the hotel and the bells are wonderful to wake up to instead of an alarm clock.

Time to catch up on some book reviews…

Absolutely loved this book told from the dog’s point of view.  As an audiobook especially, it feels like the dog is literally telling you the story.  I even got choked up during a couple different sections of the book.

For anybody that loves dogs AND the military, this is a must read.  Great historical anecdotes mixed in with present day stories from the front lines along with all of the training that goes on behind the scenes to get the dogs and their special operations handlers ready to protect their team mates and get everyone home safe.

Again, I highly recommend the audiobook versions.  Read while you drive and get the extra nuances that a narrator can bring to the stories.  Enjoy!

I’m reading a new book. Or, as so many people like to give me a hard time about my audiobook listening, I’m having a book read to me.  Either way, it is very enlightening so far.

Sloth and gluttony – two of the 7 deadly sins – are we fat because of them or do we give in to them because we are fat? If the latter, then why are we fat?  This book discusses the idea that our biochemistry drives our behavior rather than our behavior driving our biochemistry.  I think it is a cycle, but there is more to the story… sugar.  Too much sugar screws up our biochemistry which in turn drives us to eat too much and sit on the couch.  Cut out the excess sugar and our biochemistry returns to normal and we feel full and energetic and go do fun, active things while eating less.  To that I would argue that you could simply say, “It’s still my fault that I’m fat because I choose to eat all that sugar that screws up my biochemistry.”  I’m going to make a concerted effort going forward to pay attention to sugar in everything I eat and feed my kids.  I’m curious to find out how easy or difficult it may be to cut out excess sugar.  I think I will be shocked by what I learn.  Want a sneak preview? Check out the cereal boxes in your pantry and compare them to the statistics below.  No wonder my kids are happy to eat cereal for dinner. 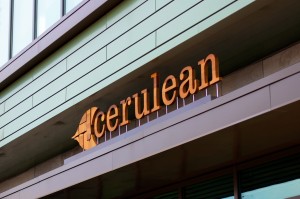 Destination dining done right.  We loaded up the car and drove the 125 miles from Warsaw, the home of the original Cerulean, to Indianapolis, the home of the new Cerulean in CityWay not far from Lucas Oil Stadium.  Disclaimer: my brother works at the restaurant in Indy, so I had extra motivation to make the trip. 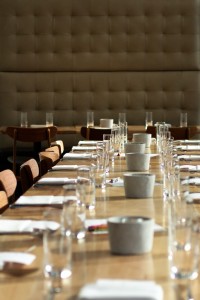 Inside, the restaurant has a great atmosphere with several distinct spaces that flow well from one to the next.  We sat in the main dining room but “The Nest” will be a request on our next trip (no photo… you have to see it for yourself… very unique and eye catching!). 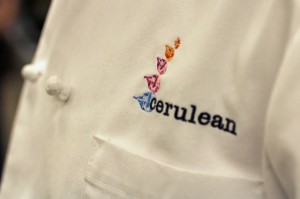 My brother, like the natives in far off lands, believes that if you take his picture, you will steal his soul with the camera.  So… I was only able to sneak a shot of the logo he proudly wears. 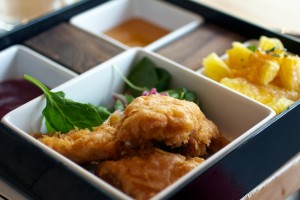 They brought out Logan’s chicken from the kids menu as soon as it was ready.  I love it when restaurants serve the youngsters first to keep them well behaved.  As you can see from the photo, kids are foodies too.  Logan’s take on being a restaurant critic: “I dipped two in the honey and one in the cranberry and I liked the honey better.” 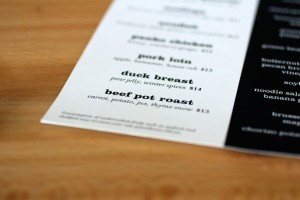 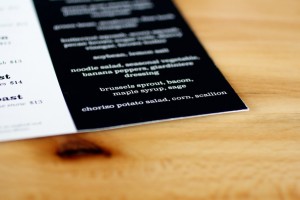 Yes, brussels sprouts.  Those vegetables everyone talks about even though most have never even eaten one.  Let me just say – I almost ordered more for dessert.

I will let the food speak for itself… 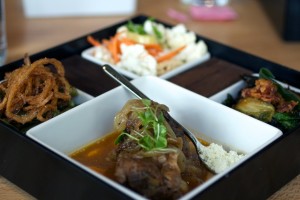 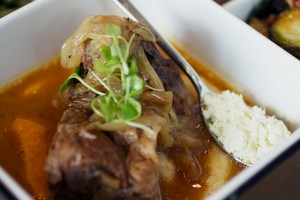 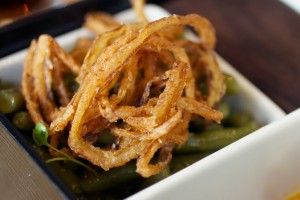 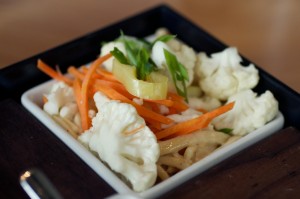 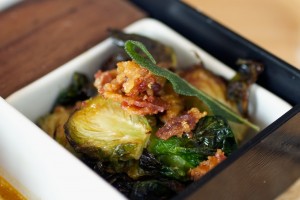 We had a party of 7 and all the food came out together with flawless presentation and service.  Between the 7 of us, we ordered 4 of the 8 “main” dishes and 9 of the 11 “side” dishes.  I already raved over the brussels sprouts above, and the roasted carrot soup also deserves some fanfare as well as a dish that elicited unexpected ooh’s and aah’s and mmm’s.  My pot roast was more than fork tender and full of complex, rich flavors.  For those of you that think chuck roast, packet of lipton french onion soup, and some chopped veggies in the crock pot when you hear pot roast… don’t let the name fool you.  Filet mignon isn’t just a piece of steak and this dish isn’t just a roast.  I highly recommend it when you visit. 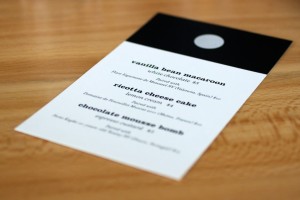 After driving 125 miles, you eat dessert.  Period.  All three desserts have a wine pairing option, and I chose the ricotta cheese cake because it seemed the best match for a glass of wine.  And, yes, it was after 5 o’clock somewhere.  Again, between the 7 of us we tried all 3 desserts. 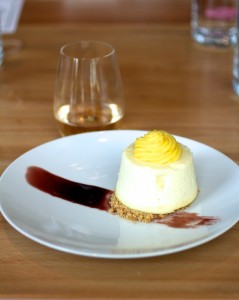 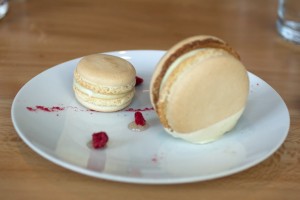 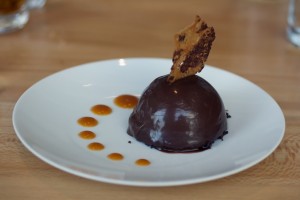 The “bomb” inspired the same reaction several times: “Oooh! There’s something in the middle!”  You’d think the ladies were opening jewelry at Christmas, but it was the “chocolate mousse bomb” that made them say it.  For my part, I thought the cheese cake and muscat were decadent and a perfect way to cap off a perfect foodie road trip.

We asked to see the dinner menu before we left.  I almost sat at the table for four hours so I could eat dinner, too.  Next trip, next trip.  I loved the local touch on the last page of the menu giving credit to the farms and farmers that lovingly raise the food served so well at Cerulean. 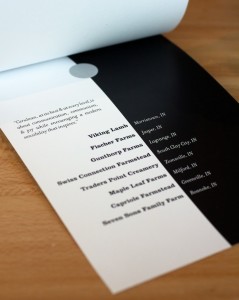 So who is going with me for the dinner road trip???